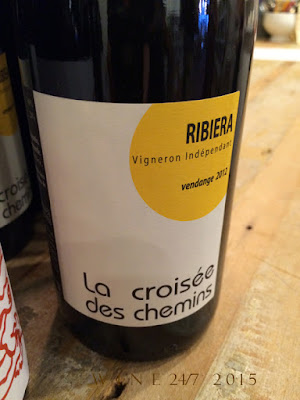 
Garnet red in color, with a tinge of sienna bespeaking a certain earthiness, this all-natural wine has deep, wild sweet fruit and earthy spice box on the nose; Brambles, dark cherry, black raspberry  and deep violets on the palate, with notes of eucalyptus, cedar, dark cocoa and graphite. Exotic spices such as star anise make ephemeral appearances ... with rich bright fruit shining through all that funky earthiness and clean dry finish making for one sexy red! $23/btl at Maine & Loire on Washington St. in Portland.

Unfined, unfiltered with zero added sulfites, grown without pesticides and with natural vinification, here is a tour du force! Some natural wines are extremely mercurial. While I enjoyed many nuances with this one over the course of a couple of days, I found it held together and opened up beautifully. The vines grow on galets roulés and marl, round rocks over lime rich clay and silt. 35 year old vines are hand harvested and de-stemmed before a 3 week fermentation in steel vats. Aged 10 months in tank and demi muid (an oak barrel used for centuries to transport wine by boat, allowing for long aging periods with phases of prolonged reduction. Used generally for Mediterranean varietals such as Syrah, Grenache and Mourvèdre).

Winemaker Regis Pichon of Domaine Ribiera was originally a sommelier in Paris at one of the world's great cellars at La Tour d'Argent, as well as having worked at the renowned wine shop Hediard where he met his wife Catherine. In 2005, they moved from the city to a small wine village in the Languedoc region of France called Aspiran; located on the western edge of the Hérault Valley between Clermont l'Hérault and Pézenas, amidst a sea of vines, olive, pine and oak trees. While he does have a background in the classics of Bordeaux and Burgundy, the inspiration which drew him to winemaking was tasting a bottle of Pierre Overnoy from the Jura ... a wine made without sulphur that exhibited such freshness and quaffability. He presently leases a small winery, sharing space with fellow independent producer and winemaker David Caer from Clos Mathélisse.


Maine & Loire (Wine Shop), opened in the middle of January of 2015 in Portland's East End. Proprietors Orenda and Peter Hale spent many years in New York city restaurants and more recently in Williamsburg, Brooklyn before envisioning a retail space where they might bring together all they love. They've filled a niche here, focusing on wines truly expressive of place, supporting growers and winemakers who work and nurture the land where they grow the grapes. This along with championing wines made with minimal intervention, from vine to cellar to bottle, organically and/or biodynamically farmed, "celebrating wines that are alive and soulful". 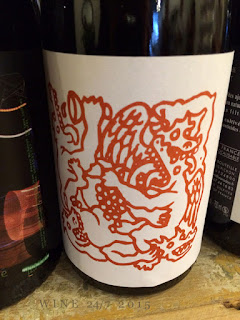 Another of my favorites from the day's line-up - Sistema Vina, "Chateau Paquita" 2013. From Felanitx, Mallorca, Spain, this is 40% Callet & Montanegro, 20% Monastrell. This one reminded me of a French Rhone wine with funky, earthy nose, spice and depth of cherry fruit. Grown in red and calcerous clay high in iron oxide and galets roulés. Here is one I will indeed revisit!


La Croisee des Chemins is from Zev Rovine Selections, a purveyor of handcrafted wines from Brooklyn, NY. Imported by Fruit of the Vines, Long Island City, NY. Both are and distributed here in Maine by Devenish Wines.